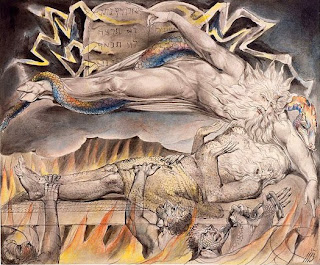 I would like to write a story involving monsters, and monsters only.

Now, I'm aware that fiction is brimming over with vampires and zombies and werewolves and unnameable tentacled things. But there is a common element to all these stories, and it is one I'd like to try (stress try) to erase from my story: the human element.
I've been mulling over how one might go about writing an actual story (I'm not talking about a vignette or a mood piece here, but something with plot and a beginning, middle, and end) in which not only are human beings totally absent, but so are human motivations and emotions. Is it even possible for a writer to segregate his or herself from these elements and still create something compelling?
Monsters have served as metaphors for a variety of our impulses: desire, feelings of loneliness and isolation, rage, our fear of death/hunger for immortality, etc. What if all those recognizable handles were shunned?
H.P. Lovecraft refined the art of presenting awesome, monstrous forms that were icily detached from everything that we think (stress think) makes us human. But HPL's stories (again, excluding mood pieces and poems) all involved human beings to greater or lesser degrees.
I'd like to rest the fate of one entire story in the claws of something utterly non-human, something that is not seeking love, a creature that is not plagued by a desire to destroy or reclaim this world. Would you join me in this, gentle reader? What might a person discover about themselves through such a tale?
Perhaps one day I'll have an example to offer...
Posted by Richard Gavin