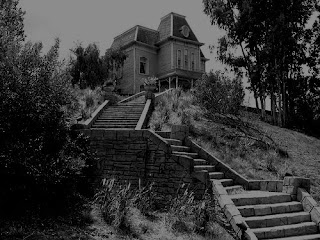 Games Night at the Bates Motel
by Richard Gavin

they’re only little games we play.

Sometimes we may even falsely register
as Mr. Smith or Ms. Doe, or as Marie Samuels.
Thin white lies,
little games
to rejuvenate the puppet-cord routine
of punch-clocks and 9am conclaves.
Anything to tilt our lives a bit askew.

For in the end, what cuts our games apart
from those of a seemingly Normal Man
who Baits women into his lair,
is a question of degree.

The scope of his game is just a little grander.

A fake name on a register
or a weekend tryst off beaten paths
is just as much a game
as tilting life and death inverse
until the living are but insects scuttling a dusty bowl
or stashed in swamps,
while the mighty Dead are perched in gothic splendour
in a temple
on a hill
beneath a baleful moon.

There is a waltz of neon Vacancy
& nocturnal conversations
between one who likes to speak her sawdust dreams
to her beloved,
who sets the rules.