ZOMBIES! An Illustrated History of the Undead by Jovanka Vuckovic 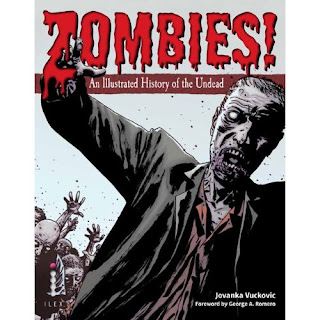 Thus far 21st Century Horror has, in the mainstream at least, been dominated by a pair of time-tested bogies: the vampire and the zombie. While the former seems to have only enjoyed a spike in popularity after being de-fanged and sanitized in order to increase its teen appeal, the latter has more or less maintained its ferocious image while still growing to become a prominent emblem of our contemporary fears. There have been many books that chronicle the history of the sanguinary creatures of the night, but the genre was primed for a thoughtful, accessible survey of the shuffling, flesh-ravenous undead. Enter Horror aficionado Jovanka Vuckovic, whose Zombies! An Illustrated History of the Undead (St. Martin’s Press, 2011) is a rich survey of this enduring subgenre.

The book itself is a thing of beauty. Lavishly illustrated with sharp reproductions of one-sheets, stills, and screenshots of just about every movie, book, video game, TV show, or comic that ever gave more than a passing glimpse at the walking dead, this is a visual feast of the first order; the kind of volume one enjoys simply looking at. Textually, Vuckovic does an admirable job digging back to the zombie’s roots in voodoo lore and then moving through travel tales, pulp fiction, and early cinematic entries. With a clean, declarative prose style that is entertaining without being fluffy, the author ably chaperones the reader through ninety years’-worth of the undead.

Those familiar with Jovanka’s journalistic honesty know that she never pulls punches and Zombies! is no exception. Whether calling out the xenophobia and racism of early zombie fiction and film, the misogyny of some '70s Eurohorror, or tearing a strip off some of the cash-grab “sequels” of recent years (Day of the Dead: Contagium I’m looking in your direction), this book is assuredly not a blanket endorsement for anything and everything cadaverous. There is a keen critical eye at work here. Even George A. Romero, father of the modern zombie film and author of this book’s Foreword, is called to task for some of his recent missteps, while more under-appreciated titles like Romero’s Day of the Dead and Dan O’Bannon’s Dead & Buried (1981) are given their due.

If you’ve just stumbled upon the gut-munching subgenre by way of contemporary sensations like The Walking Dead, or are a hardcore connoisseur who never misses a zombie walk, lines up in front of Best Buy any time a new installment of Resident Evil is released, and can recite Return of the Living Dead verbatim (as sadly I, and I’m sure Jovanka, can) Zombies! An Illustrated History of the Undead is essential reading. Copies can (and should!) be had here.
Posted by Richard Gavin