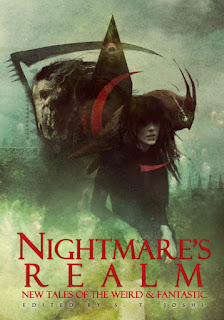 The anthology Nightmare's Realm: New Tales of the Weird & Fantastic, edited by S.T. Joshi, is now available through Dark Regions Press. The book is published in three editions: trade paperback, e-book, and a deluxe hardcover that is signed by all contributors.

Nightmare's Realm includes my story "Cast Lots," a tale I'm admittedly quite fond of as I feel it ably showcases my devotion to oneiric terror. Like many of my stories, "Cast Lots" is the product of image, from both Dream and from trance.

Akin to this, last night I experienced a peculiar Dream phenomenon: I found myself living the role of the protagonist of a story I only recently completed. Or rather thought I had completed. The fact that I was living out the actions of this character became apparent to me early on in the Dream. However, as it progressed I began living out an alternate version of the as-yet-unpublished tale. I was zigging where my character had zagged, so to speak.

Upon waking I ran the images over in my head and knew what had to be done: The existing draft of the story had to be torn down and rebuilt from scratch, all in accordance with the Dream. This is now one of my current projects.

Every writer has their own reasons as to why they write and how and what they wish to convey. For myself, literature always serves to convey the vision, to honour the Spirit who first infused the image with power. I strive to always do this with purity and sincerity. I do not shoehorn these into the narrow confines of what is often considered "acceptable" for fiction. My narratives are not designed to be transparent, my prose is set down to evoke, rather than simply describe.