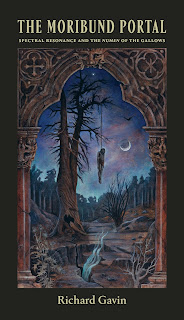 In honour of the Winter Solstice, when cold shadows of misrule creep in, it is my distinct honour to announce my next publication: The Moribund Portal: Spectral Resonance and the Numen of the Gallows.

Spirit-inspired and realized after a year of praxis, reflection, and study, The Moribund Portal will be published as a concise occult monograph in May 2018 by Three Hands Press. The sumptuous cover is by the astonishingly talented Benjamin A. Vierling.

A description of the book:

"Beyond its vulgar function as a means of execution, the Gallows has long served as a source of esoteric power. From the severed appendage of the thief that becomes the Hand of Glory to the fallen seed that spawns the mandrake root, the Hanging Place is awash in the sinistral ambiance of authentic Sorcery.

Richard Gavin weaves together threads of folklore, spiritism, and occult philosophy to create a tapestry of grim vitality. The Moribund Portal: Spectral Resonance and the Numen of the Gallows examines the subtle yet potent symbiosis that exists between the incarnate world and the realm of the Dead. This book’s exploration of the liminal space between firmament and earth, where Odin perceived the runes and Christ witnessed the celestial kingdom, is designed to illuminate the macabre portal through which one may glimpse the Otherworld."

Although various aspects of the project are still being finalized, Amazon does have the book available for reservation, which can be done here.