Occultation by Laird Barron: A Review 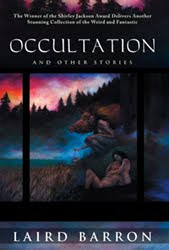 One “needs no earthquake to open the chasm,” Hawthorne assures us in The Marble Faun, “A footstep, a little heavier than ordinary will serve.” Fissures in the apparent, protagonists sucked into the expansive Real that seethes under the skin of the everyday; this is the quintessence of the weird tale. And while many writers broach this area, the result is often lacking. Authors sometimes gush with*too much* imagination, producing works that come off as self-indulgent and intangible, or by contrast, steep their stories in so much real world physicality that the all-important touch of strange becomes lost amidst familiar textures.

Reaching that fine balance between; aye, there’s the rub.

Few writers working today are more skilled at swirling the outré into the everyday than Laird Barron.

With Occultation Laird Barron successfully breaks the so-called “sophomore curse” by unleashing a second collection that not only equals but in fact surpasses his previous effort on every level. Nine diverse stories are bound within Night Shade’s customarily exquisite book production (including an evocative wraparound illustration by Matthew Jaffe and a metaphor-rich Introduction by his fellow weird scribe Michael Shea).

The book charges out of the gate with “The Forest”; a tale of old friends reuniting, mad science, and the prospect of an intelligence and order beyond the human.

The eponymous tale is, quite simply, a masterpiece of fear fiction that juxtaposes the vast changes occurring in the night sky with the small lives of its two protagonists who are holed up in a cheap motel. Much of the terror to come is expressed through the couple’s seemingly innocent pillow talk, until the final revelation, which gave this reader a genuine frisson. I can say little else about “Occultation” other than I wish I’d written it.


If Hawthorne’s observation has ever been given fitting dramatic expression, it is in this book’s third story, “The Lagerstatte.” Here Barron not only introduces us to a woman whose tragic past fills her with suicidal tendencies, he in effect places us inside her skin as she inventories what might be a familial disposition to self-destruction. Like others in this collection, the plot of “The Lagerstatte” moves murkily. It is a kind of oneiric waltz where internal reverie and real world action marry, part, and reconnect again. The most powerful aspect of this tale is that it encourages its reader to ponder whether life traumas do in fact shape us as people, or if it is the way in which we *perceive and interpret* such traumas that ultimately seals our fate.

Taking its title and underlying theme from the unorthodox theology of Rudolf Otto, “Mysterium Tremendum” is not only the book’s longest piece, it is in many respects its fulcrum, the hub around which the other tales revolve. Ostensibly this novelette deals with a group of lovers and old friends chasing the dragon in the form of a guidebook known as Moderor de Caliginis (“The Black Guide”) as they set off to a legendary mountain range in the Pacific Northwest. Though the details of the area’s history are rich, they ultimately pale into a kind of MacGuffin, but that is only because Barron manages to create characters so palpable, so very much *us*, the reader is willing to follow along, no matter what the quest. Barron understands that the characters’ *process* of seeking the Mysteries is far more important than the Mysteries themselves. There is a distinct Don Webb vibe to this piece, which eventually gives way to a unique study of the great-in-the-small, the shuddering dread that often comes with discovery. It is at once violent and expansive.

The next trio of tales is culled from recent anthologies that pay tribute to two terror titans: Poe and Lovecraft. “Catch Hell” and “The Broadsword” are Barron’s takes on the gentleman from Providence, while “Strappado” supplants Poe’s obsessions of mental decay and paranoia into the life of a modern businessman travelling through India. Of the two Lovecraftian pieces, I found
“The Broadsword” the most captivating, with its depiction of a curmudgeonly old man in an apartment building that might just be on the threshold of another realm.

“—30—“ deals with some unusual, downright creepy, animal behaviour as seen through the eyes of former lovers. Here again Barron’s fascinations are demonstrated: the ways in which we cling to the vestiges of our past (often in the form of former lovers or friends reunited), the fact that we often regard our futures with trepidation, the manners in which we can be oblivious to the here-and-now, which is sometimes lunging out to grab us.

While I believe “Mysterium Tremendum” is the book’s crowning jewel, the final tale, “Six-Six-Six,” was my personal favourite. A man returns to his childhood home after his parents’ demise and begins revealing his chilling family history to his wife. Beneath the natural conversation between the two characters as they sip their wine and crack jokes there is a tight-wire of tension that Barron ratchets more and more as the story progresses. We know from paragraph one that something *awful* will occur, but are led along with Barron as our puppeteer until that marvellous last line.

One of literature’s greatest enchantments is its timelessness. Finely-wrought stories allow us to see how humanity has remained changeless, or has evolved, or has devolved over the years. And while there is great merit in experiencing the Jazz Age as evoked by Fitzgerald, or the Russia of Tolstoy, there is a rarer pleasure to be had reading a book of its time. This is Occultation. Of course, like all writers, Laird Barron has his influences, both past and present. Nevertheless, he is writing the weird tales of *this age*. His fiction is sure to stand to the test of time, but like readers of Mary Shelley’s debut novel in 1818, or of Fritz Leiber’s contemporized supernatural Horror tales in the ’40s, would have seen, Laird’s work is something of the *now*. These stories crackle not only with the noble elements of the genre’s past masters, but with the spirit of the here-and-now of Horror, and the potential of what might come tomorrow.

The 21st Century has indeed seen a new Golden Age of the supernatural Horror story, and with Occultation Laird Barron has placed himself at its forefront.